The Forge of Fury - A Peek Behind the GM Screen

As the heroes of the Shinning Scorpion make their way through the Foundry level of Khundrukar they find themselves in dwarven halls that once served as living quarters. These rooms and passages seem filled with undead, the remains of the 100 year gone battle that was the fall of the dwarven stronghold.

As GameMaster I am privy to the details of these halls, yet the players only get a fraction of that info. Even when they do explore rooms only so much can be shared with them as they go, which leaves behind a lot of cool story they may never learn. Story which could be hard to separate as character knowledge and player knowledge.

But now that they've already explored most of the area I thought it would be nice to detail them here, away from the table, where it can be extra story that will not influence the game. Nor will it cause the players to make choices solely based on this extra knowledge picked up during their gameplay.

Area 41) The Kitchens
A century ago, one of Durgeddin's chief advisors was a high-level cleric of Moradin who prepared many defensive spells in and around the Foundry. One of the surprises he left was an animated object - a large table - in this room, with orders to attack any non-dwarf who entered. The cleric's exact orders were "Attack any non-dwarf who enters this room, unless a dwarf tells you to stand still."

I guess Durgeddin didn't have any guests over for dinner who weren't dwarf.

Area 42) Desecrated Shrine
Durgeddin made his last stand in this very chamber, laying about with his sword until his orc enemies finally overwhelmed him. The orc war-priests wanted to make sure that their terrible enemy would never return; they pronounced dire curses over the remains of their hated foe. Then they chose a fierce orc warrior to remain here forever in undeath to slay any who found this place. The orc champion became a wight and was supported by three large skeletons, powerful creatures who once served the orcs. In life they were a minotaur and a pair of equiceph (similar to minotaurs but horse humanoids).

Areas 43 & 46) The Dwarf Halls & Common Room
The dwaves of Khundrukar lived in private rooms to the north of the Great Hall. The orc horde pillaged most of these rooms, cutting down all the dwarves they found and carrying off any treasure they came across. These areas became the demesne of an undead dwarf - the cleric Arundil - who now exists as a wraith. Once the leading priest of Khundrukar he fled during the final assault using his magic to escape the slaughter. He returned later to find all of his kinfolk dead. In his despair and guilt he attempted to repair some of the defenses for the complex, animating dead warriors - both dwarf and orc, to kill intruders who may return. Arundil went mad in his grief and perished a mere few weeks later.

Well, there's some detail on the recently explored areas. Who knows what the players will stumble into next as they search the ancient halls? Well, the GameMaster knows ...
Posted by Unknown at 11:13 AM No comments:

Return of the Funky Ones!

The guys do a little investigating and find that the Dockway in Magnimar is infested with Goblins! After talking to Rory the Town Guard the guys remember the whereabouts of the Midnight Milk warehouse. Are they ready for what they will find within..?

Posted by Unknown at 9:24 AM No comments:

"Centaurs! D&D got Pathfinder on size but the latter added a female, so they take the prize. Although my fave is still D&D's centaur hero miniature. The black and white color scheme which flows through the mane and beard is pretty original."

"The whole clan rides out together! Nine centaurs strong!" 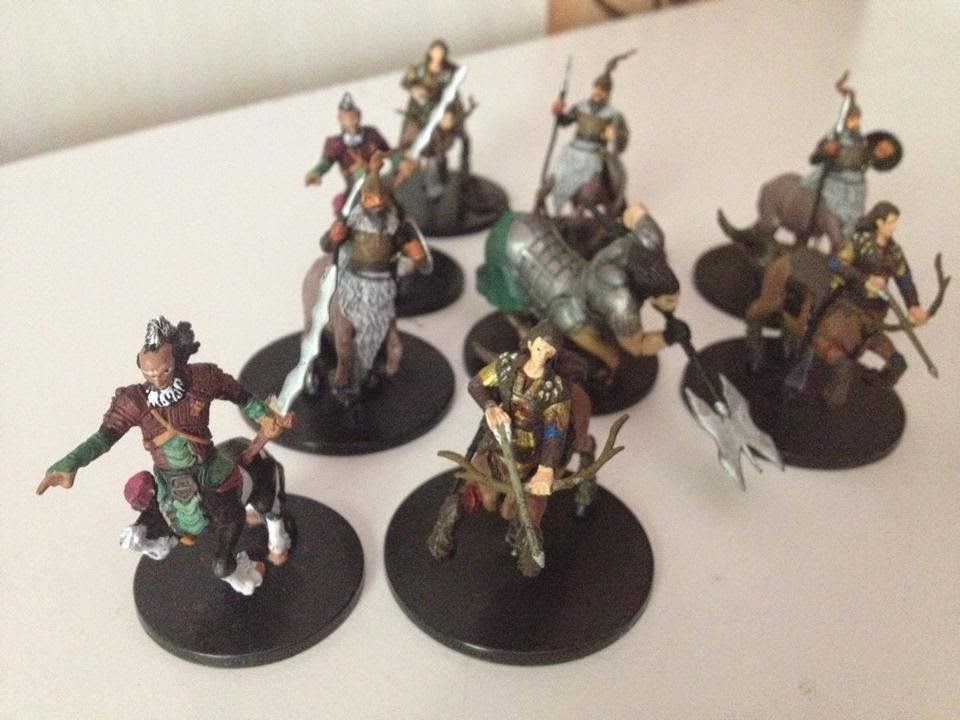 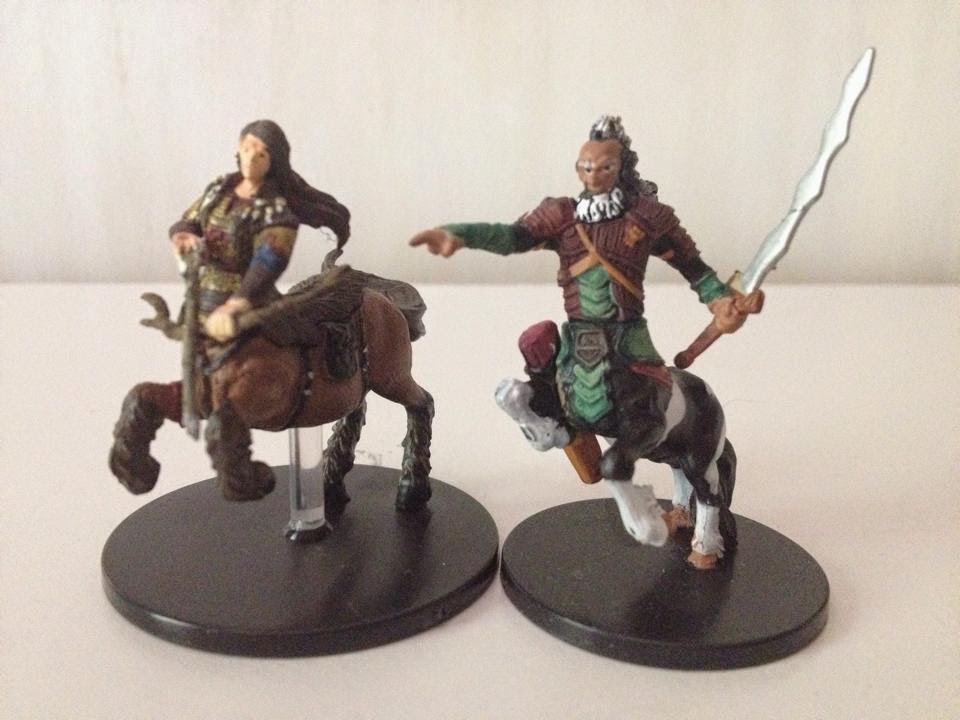 "D&D centaur war hulk on left, Pathfinder on the right" 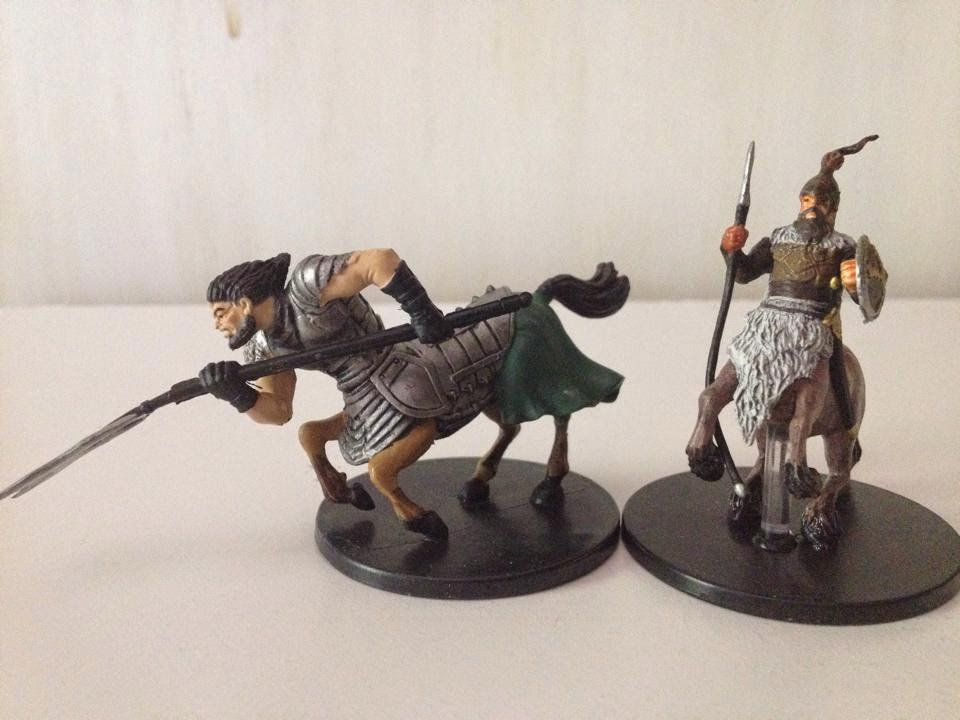 Posted by Unknown at 1:15 PM No comments:

After defeating a magically animated table, the crew stumbles across some big, undead monsters! From Jared: "Forge of Fury - Desecrated Shrine. Once dedicated to dwarven gods, now defiled by orcs. Orc war-priests bound a fierce Orc warrior to slay any who found this place. The Orc champion, now a wight, is flanked by minotaur and equiceph skeletons."

Steelheals softens them up by channeling positive energy. 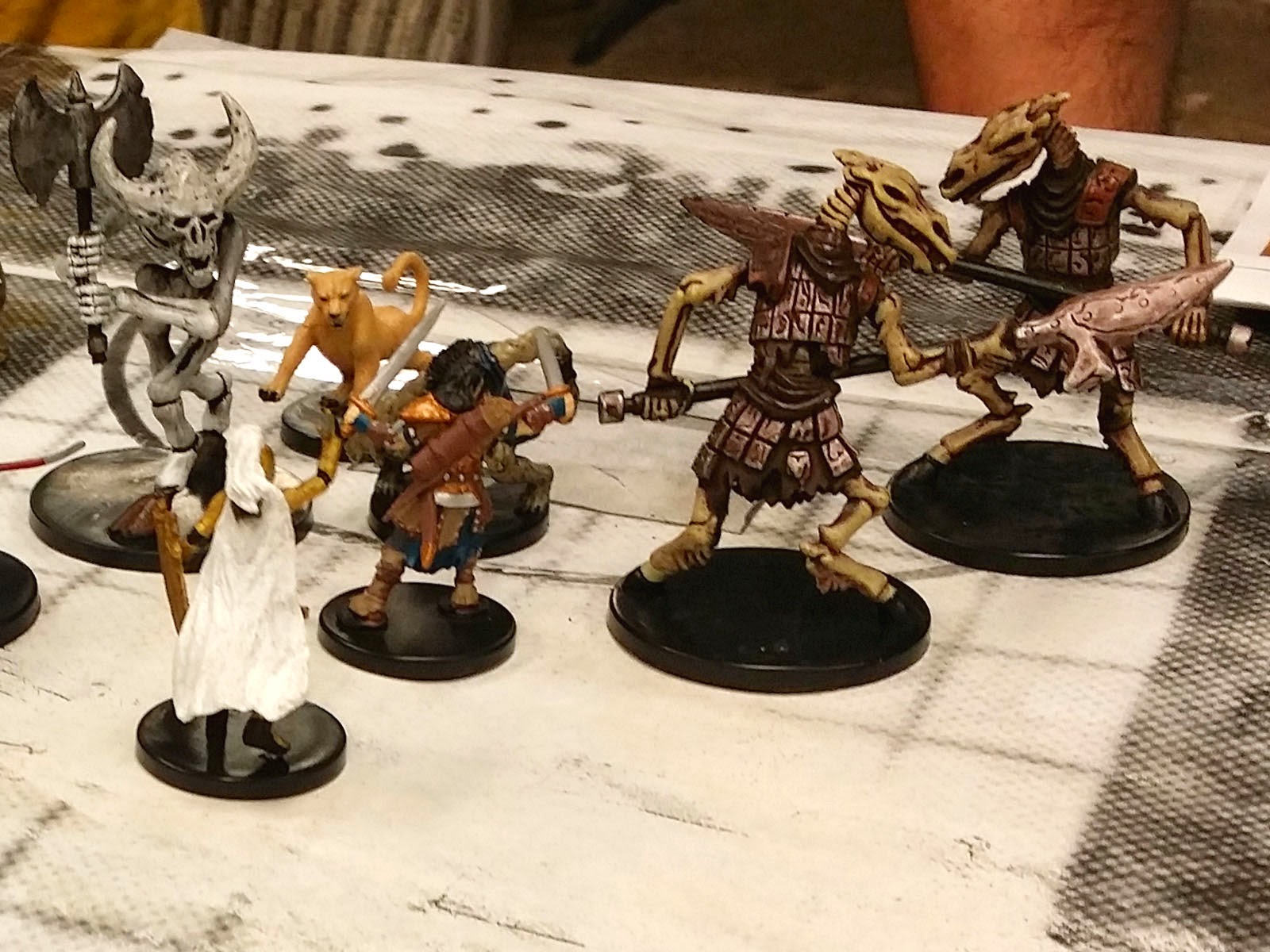 Not wanting to waste the haste spell Ehlum cast, the crew sprints to the next room, kicks down the door and fights an incorporeal monster! 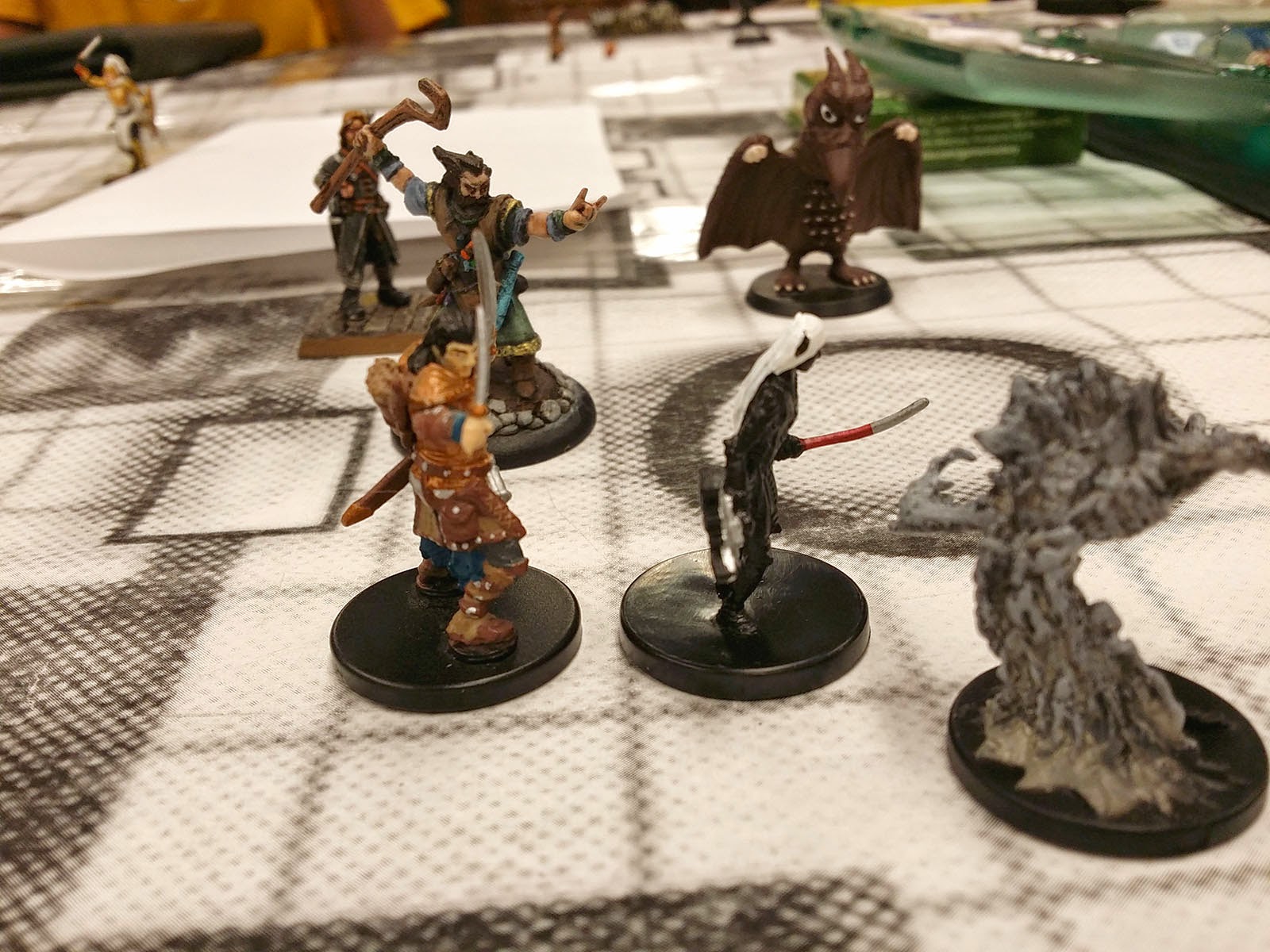 Time to search for loot. What do they find? 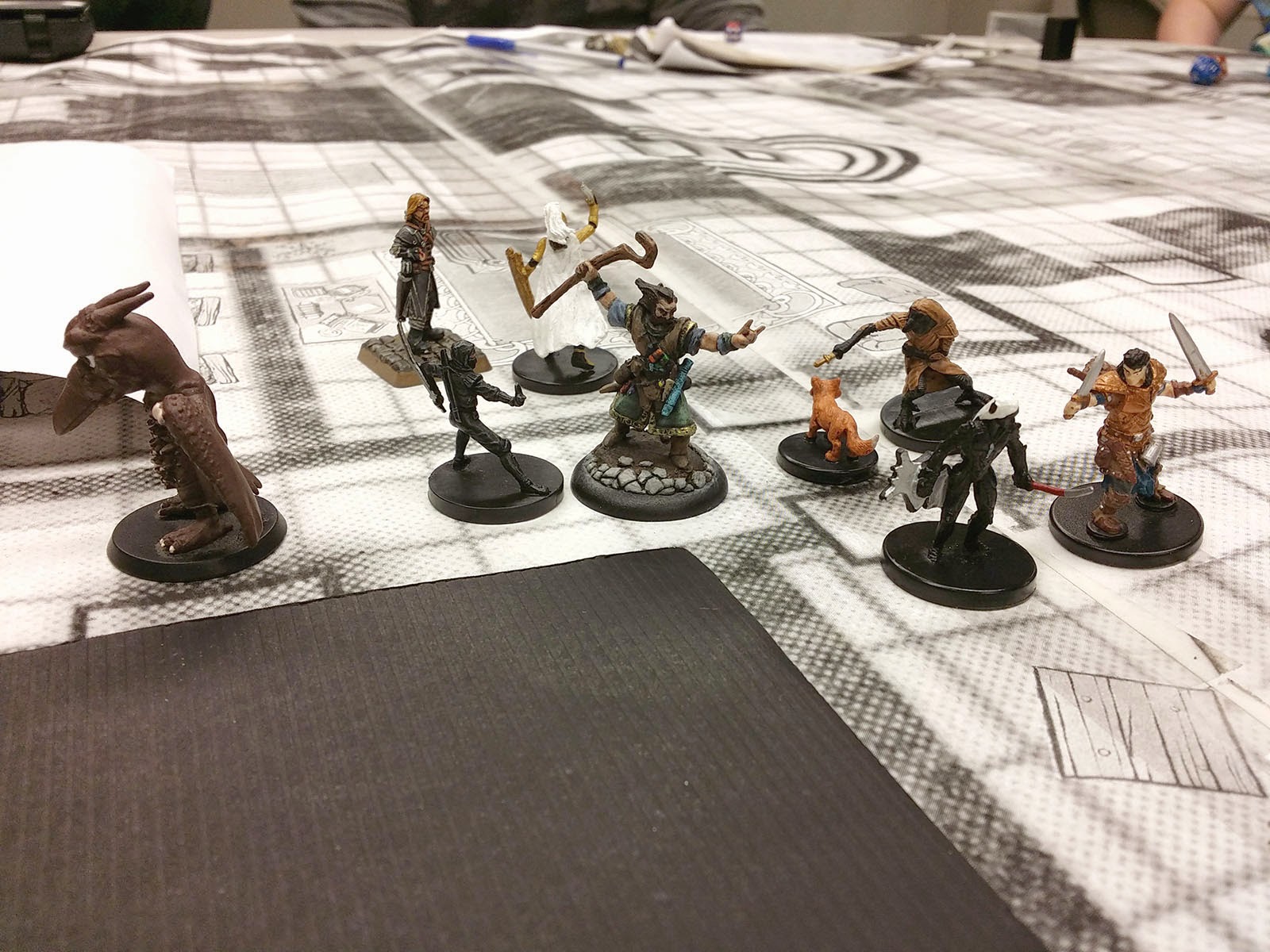 ... a magically animated floor rug of death that wants to squeeze the life out of the Shining Scorpion adventuring party! 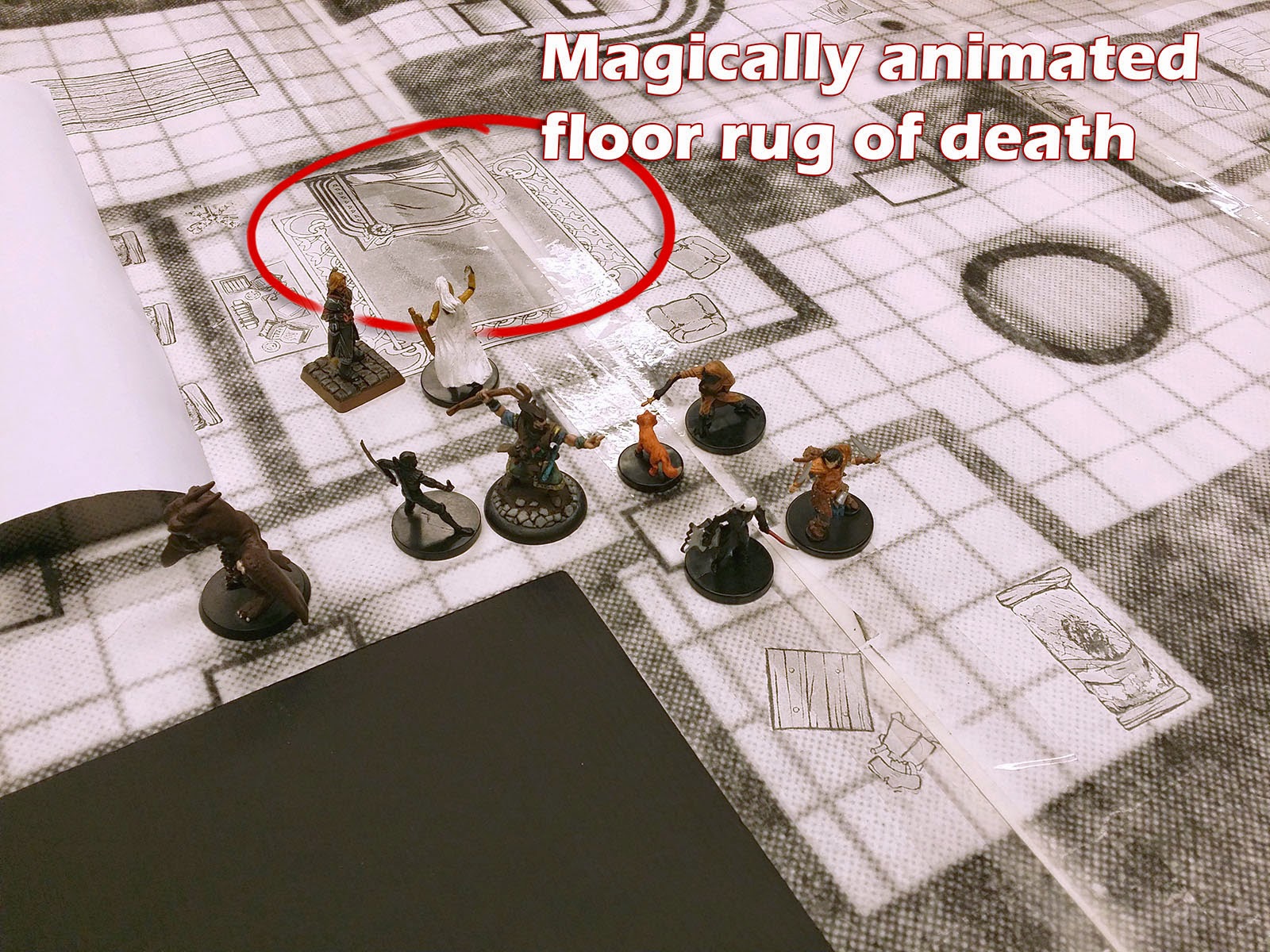 Posted by Unknown at 3:00 PM No comments: 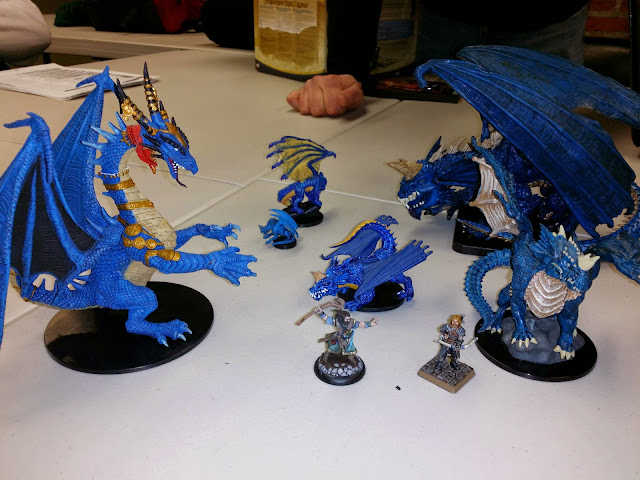 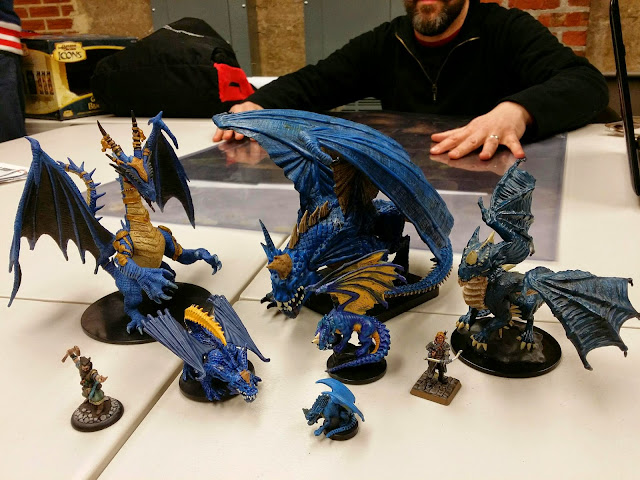 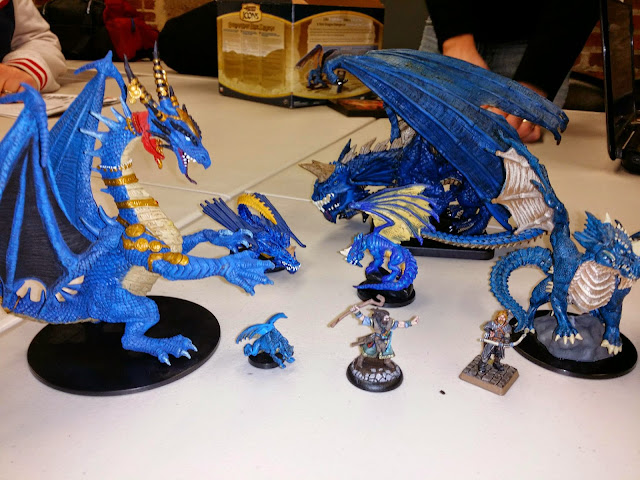 Douglas and Dragons is an online Pathfinder game I put together with some guys I know from Twitter:

The game came about after Doug and I were discussing the Nerd Poker podcast via Twitter. He said that he'd never played D&D before, and that Nerd Poker made him want to play. After Alan, Sean, and Jason said that they'd play a game with him, I offered to DM the thing. We've since played 3 sessions using a combination of Skype and Roll20, but failed to record the first adventure. So, session 2 is now episode 1, and the 3rd session will be split into episodes 2 and 3. As much fun as we had the first time, it's probably a good thing that it wasn't recorded because everyone was still trying to get everything figured out.

To create the campaign I am writing my own adventures and encounters that stem from the Pathfinder Campaign Setting: Magnimar, City of Monuments. The game so far is full of kung fu, arm wrestling apes, the smoking of sweet leaf, and gruesome finishing moves. We have a lot of fun recording the thing, and I laughed my ass off re-listening to episode 1. Hopefully that all translates for something good for others to listen to!

You will also be able to see screenshots, character art, etc, on the podcast's blog. 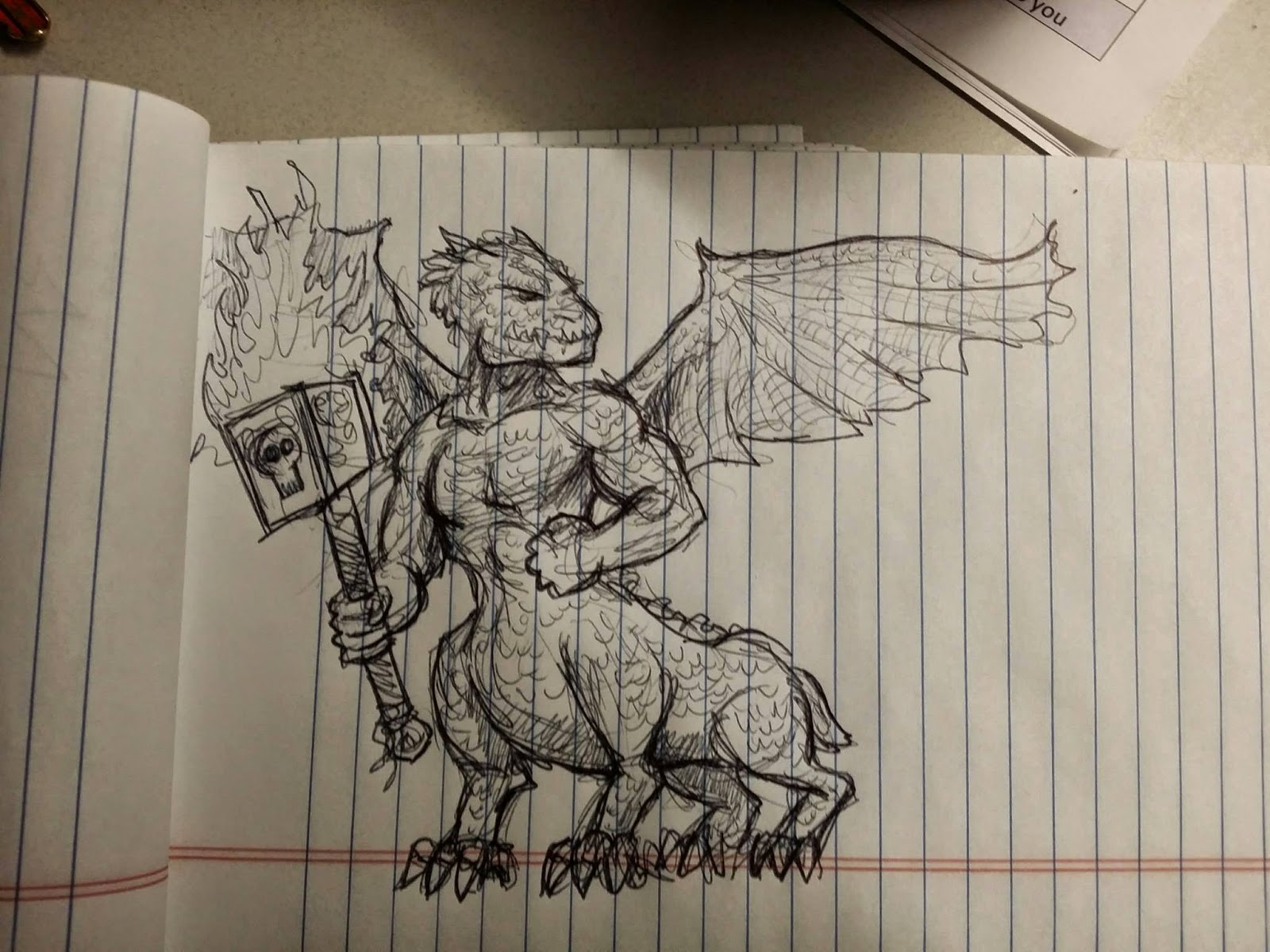 I would like to add reach to his warhammer swing, so I may drop something like improved damage on the bite. I'm also considering giving him the mount evolution and using the enlarge person spell on the beast often.
Posted by Unknown at 10:43 PM No comments:

Shining Scorpion in the Forge of Fury

The party has been through a lot. Currently, at fifth level, the Shining Scorpion adventuring crew tackles the Forge of Fury and tries to unlock the secrets of Durgeddin the Black. Tonight they awakened a big group of orc and dwarf skeletons. Steelheals takes out half of them with a blast of channeled positive energy, allowing the rest of the crew to clean up. 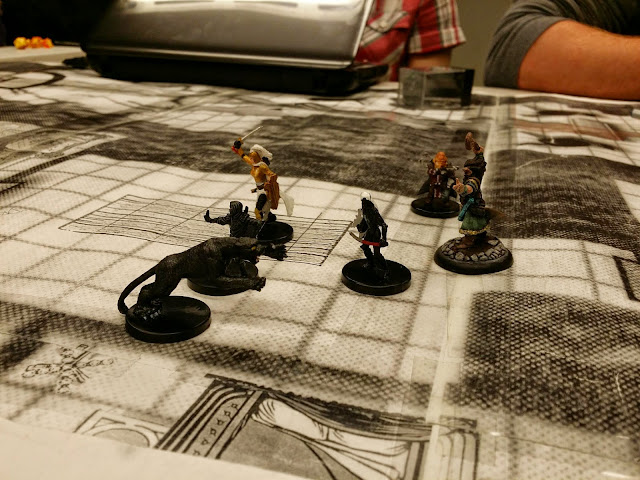 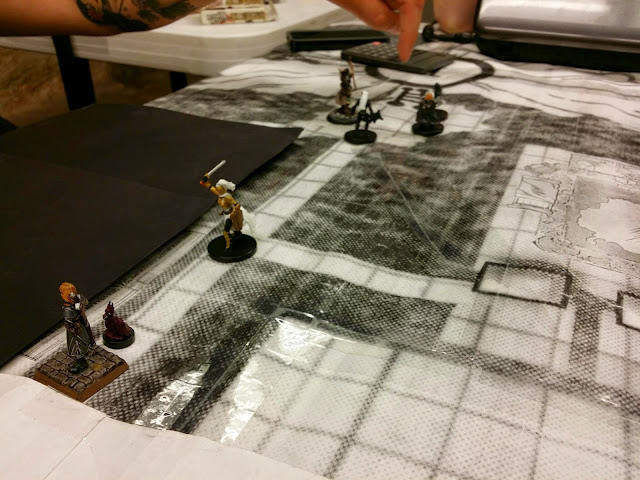 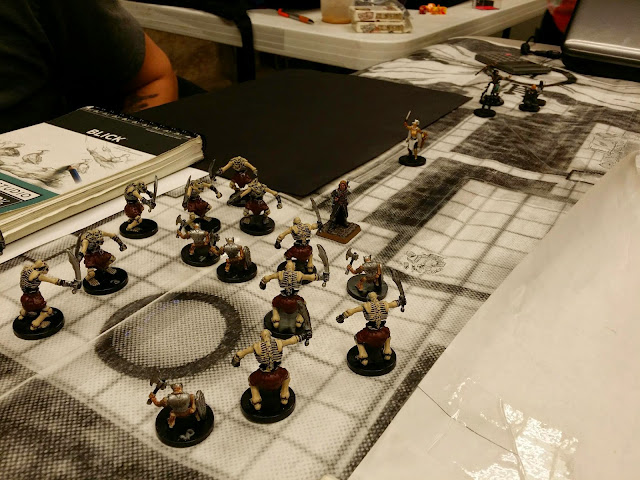 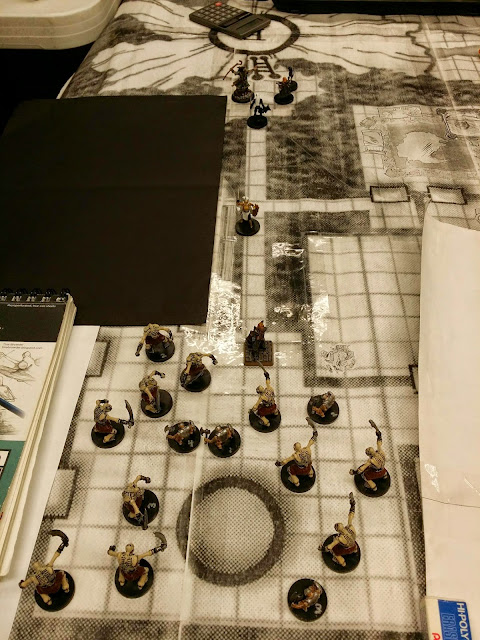 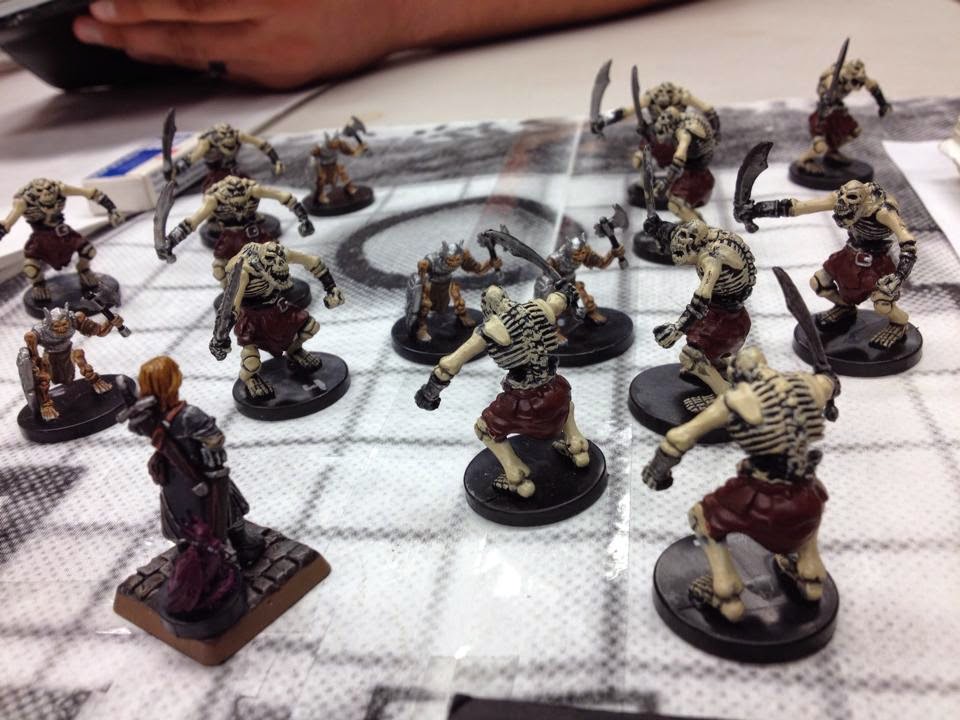