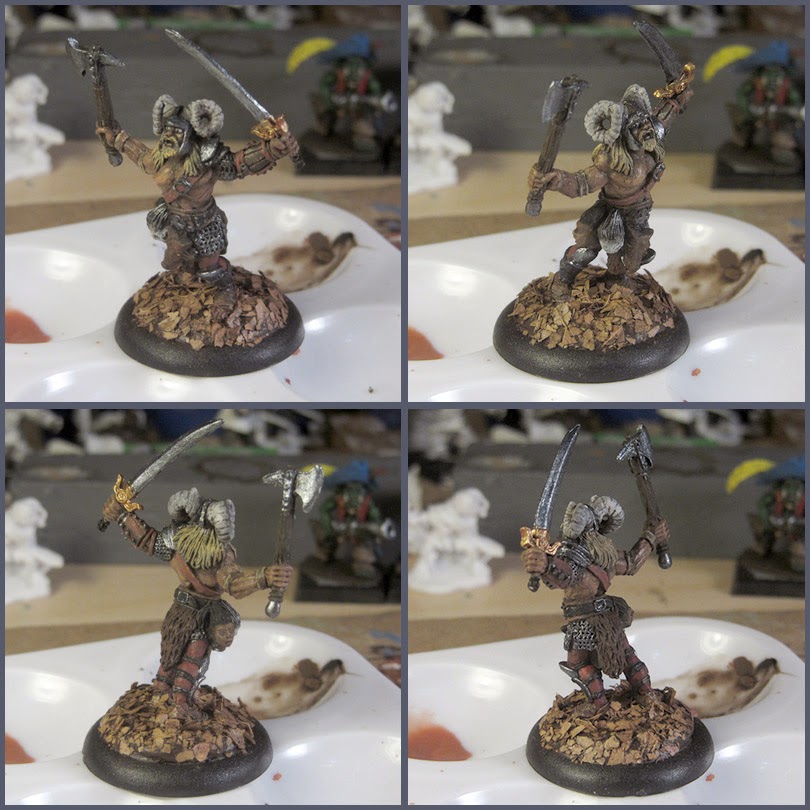 Here is the barbarian I painted recently, and used during the recent D&D gameday event.

Grokk and his party members, including another barbarian, a rogue, a cleric and a fighter, didn't accomplish much that day. Sure, they killed some goblins (which Grokk was proud of and wrote on the walls in chalk "Grokk was here, smashed many goblin heads"), but once they got into town everything went downhill. The barbarians were ripped off by a racist apothecary and rather than taking on 20 town guards, they decided to return at night to steal from him.

The rogue and the other barbarian (I forget their names) brought Grokk along and had him on lookout duty as they broke into the apothecary in the middle of the night. With astounding stealth, the rogue entered the building and found loot, even though he was poisoned by the trap on the door. In an attempt to open a locked chest he found, he released a poisoned mist and couldn't keep from coughing.

The store owner came down the stairs with a magical floating lantern behind him, and spotted the rogue. The other barbarian was standing in the doorway as the shop owner was about to say something, perhaps to cast a spell or yell for the town guard. With incredible aim (nat 20), however, the barbarian tossed a dagger that buried itself in the store owner's throat before any words could escape. In a panic the barbarian rushed in to grab goods, making enough noise to wake the store owner's wife. In his haste the barbarian broke a number of potions as he swept them into his bag. Broken glass tore the bag and a mixture of magical liquids leaked out, leaving a trail as he left the store. Meanwhile Grokk moved to the end of the alley to get a better view of the area.

Once in the alley, the barbarian and the rogue decided to start a trash fire to distract the town guard after they hear the blood curdling scream from the apothecary owner's wife. When the barbarian lit his torch, however, the magical fumes emanating from his satchel ignited. The fire rushed along the trail of magic juice leading back into the building, causing a magical explosion larger than Grokk and probably most people had ever seen. The rogue and the barbarian were burnt to a crisp and torn apart by the explosion, along with the apothecary owner's wife and their three children, and another five or six citizens in nearby homes. Grokk was knocked to the ground by the blast. When he looked back to see the grim results, he witnessed the entire area collapse into a pin hole sized spot in the air, leaving literally nothing but empty space, looking as if a giant hand had reached down from the sky and scooped up all it could grab.

Grokk reached for a piece of chalk and started writing "Grokk was not here" on the ground before he thought better of it and ran back to the inn where he was staying.