The Crew Shows Their Quality 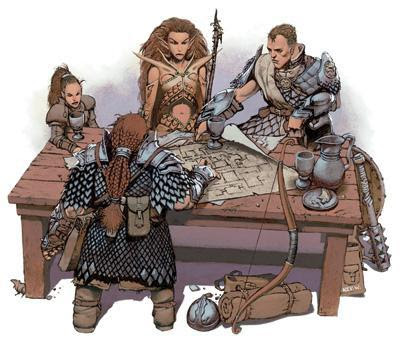 The heroes of the Shining Scorpion adventuring party have been exploring the Tomb of the Iron Medusa. During the course of facing its dangers and collecting its treasures they discovered some rather old maps. These maps are of ancient Taldor, specifically of the South-eastern border where Taldor meets Qadira. Of special interest is a couple locations that were no longer marked on modern maps of the same region. So, while the heroes are off ship in the Tomb, they handed the maps over to the crew to study and gather whatever information on these lost locations they could.


The locations of intrest are:
Everforge
House of Senses Awakened


What was also fascinating was the ancient maps did mark the location of the Tomb of the Iron Medusa before any trace of it was wiped from Taldor's history. Secondly of note was the fact that Antios's Crown appears on both current and ancient maps. This just proves how old that burial site and monument truly is. Since the airship was going to be passing right by Mount Antios they wanted to be prepared for what the Crown was all about. Thirdly the Shining Scorpion has shown interest in seeking the lair of the infamous Great White Wyrm and it was hoped that maybe the ancient map held some additional clues as to where the dragon laired.


Lem the iconic halfling bard, Mavaro the iconic occultist and Dihak Nirati dwarven investigator will be involved with every bit of research. The three of them are highly skilled in arcana, history, nobility and local knowledges. Three other crew members swapped in and out depending on what area of research and knowledge was needed. So the crew stacked the deck as best they could. If you look at any general image of adventurers sitting around a map covered table, there's typically four in the group. I decided to keep it at no more than that for this skill challenge. If it wasn't capped you could keep piling on the knowledge via "aid another" and that would basically remove any challenge at all. I've set the challenge rating for this from 12 (very easy) to 37 (heroic). If one of the crew involved has a +10 bonus to any particular skill, I added a +2 automatically to the roll as they aided whomever was leading the charge.


Sooooo ... I've got the crew stats before me. I've got dice in hand. Let's see what they can do without the Shining Scorpion holding their hands. 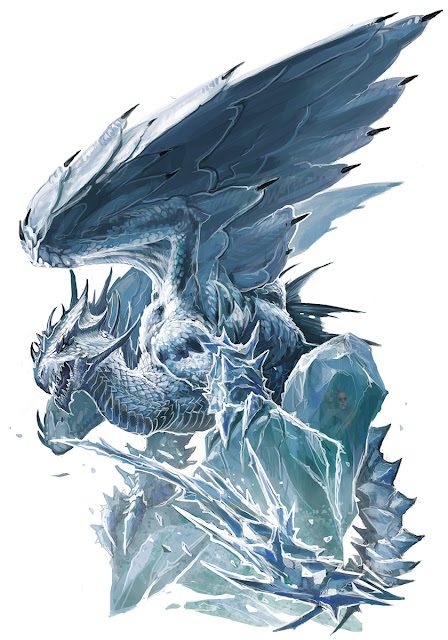 The Great White Wyrm: Immerstal the Red (human wizard) joined and lead this particular investigation. The three skills used here were Arcana for the nature of dragons, History for any info on when and where it roamed and Local for any tales, truths, rumors and myths surrounding the Wyrm.
The Rolls- Arcana: 40 History: 35 Local: 22
The Great White Wyrm once ruled the Headwater Gap, the break in the World's Edge Mountains south of the Southern Range. From atop Mount Kaltafarr, the tallest peak in Taldor and a dormant volcano, the dragon spread chaos and destruction. When Qadira controlled the area they sent many dragon slayers to do away with the dragon, yet none were successful. It wasn't until the group known as the Shining Blades of Katheer, who were rumored to possess an item capable of defeating the white dragon, marched into the mountains did all dragon activity stop. Although the Blades were never heard from again, neither was the dragon. It's been over a century since the Wyrm has been seen but his legacy lives on through the fear of the locals. 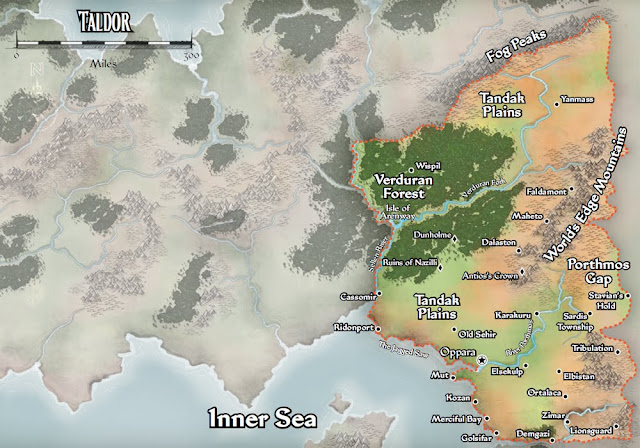 Mount Antios and Antios's Crown: Lem stepped up to lead the investigation and the trio was joined by Tredora Goldenbrow for her religious knowledge. Four skills needed are Nobility if the place is tied to anyone of great import, History for the founding of the locale, Religion for it's purpose and Local for the mount itself.
The Rolls- Nobility: 35 History: 15 Religion: 17 Local: 12
Named after Taldor's tenth emperor who constructed the enormous burial site, it's the final resting place for nobles and self-important Taldans who could afford to be entombed there. It's covered with a massive network of mausoleums, towering statutary, shrines, plazas and fountains. Antios chose the lofty peak since it's one of Taldor's tallest mountains and commands a spectacular view of the Tandak Plains below. 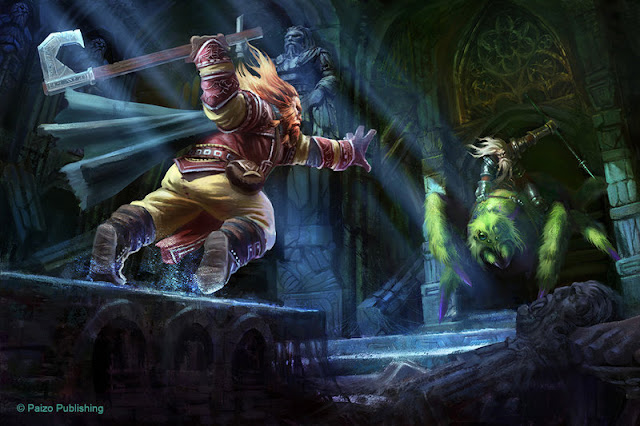 Everforge: The dwarf monk Branock filled Captain Barstool and Dihak with tales of the importance and following shame of the locale, many a night while heavy in their cups. So naturally Dihak lead here and I gave him a extra +2 to his check due to the nights spent hearing the tales spun by Branock. The crew's halfling steward, Anando, joined as well. As a house slave in Qadira, Anando had access to many a history book while in the "employ" of a eccentric merchant. History would be key in learning the origins and founding of the location and Local for making sense of the various stories and songs recited by the dwarven monk.
The Rolls- History: 26 Local: 19
Built in the shadow of the dwarf Sky Citadel Kravenkus, Everforge was a sacred temple said to house a powerful holy relic. It's rumored to be the final resting place of the dwarven oracle Naika Omenspeaker who once controlled the relic and helped the worthy pass onto Magrim, the dwarven god of the underworld. Once a place for spiritual pilgrimage it now lies abandoned. Regular attacks from Darkland creatures forced the dwarves to retreat back to the citadel in order to repel the unending attacks - which continue to this day. Kravenkus itself is also mostly a ghost town. The dwarves there too stubborn to leave despite the loss of the temple and the mines that once provided wealth to the Citadel's populace. Branock often mourned the loss of such a holy place and felt it was shameful the Five Kings Mountains never set about reclaiming the relic supposedly left behind. 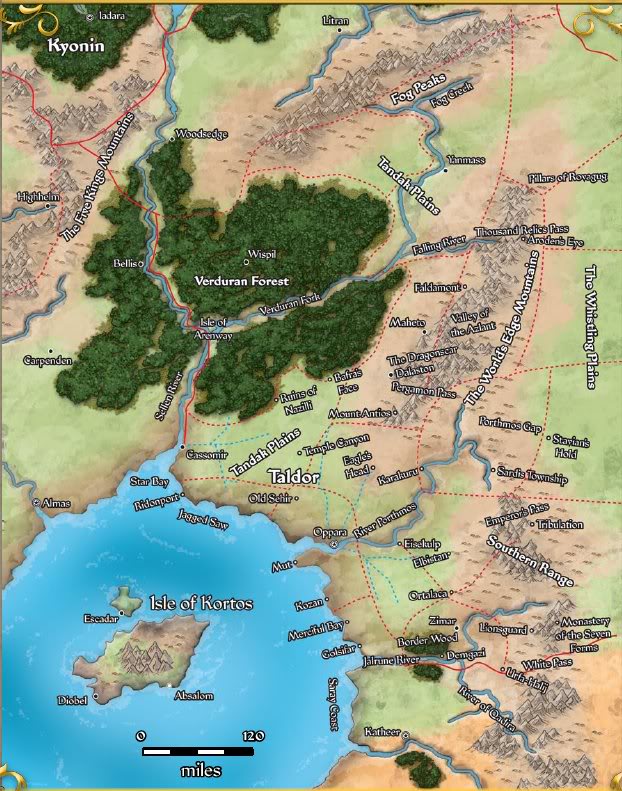 House of Senses Awakened: Lem once again led with his bardly knowledge and Anando's familiarity with the history of noble families had the two halfings once again standing on stools to get a good look at the ancient maps. Nobility would reveal the locations origins, History its foundation and subsequent loss to time and Local for any legends of what was once the purpose of the "House."
The Rolls: Nobility- 39 History- 19 Local- 22
Grand Prince Cydonus III only reigned five years but cost the Taldor empire dearly. Overwhelmed by anxiety from the Qadiran invasion he transferred a large portion of the royal treasuries to a hidden location and what he didn't hide away he spent extravagantly. Deep in the wild hill country of Porthmos Gap, Cydonus built a pleasure palace dubbed the House of Senses Awakened. He spent most of his time there away from the capital amongst all his displaced treasures. Cydonus was poisoned and Beldam I took the throne in a near penniless state. Scholars believe the maze-like structure was sealed and forgotten along with one of the largest unclaimed fortunes in the Inner Sea Region.


Well, the crew really knows their shit. There are only a few details that were missed but the vast amount of intelligence they did gather is more than enough to help the Shining Scorpion decide on whether or not to pursue any of these adventure sites. Only time will tell if the crew are ever put into this situation again. But it was a fun experiment and hopefully showcases their value. They're not just bodies to pilot the ship. They have skills and abilities to offer and are worth every coin of their salary.
Posted by Unknown at 1:07 PM