Concluding The Sinister Secret of Saltmarsh and Moving On

We've been playing, but we haven't been posting. I'll start putting more detailed updates up at the end of the nights of our games, which are usually Wednesdays. For now, here is a rundown of everything that has happened since the last post and up to this point.

The Shining Scorpion adventuring crew ends up entering the house through the back door. They tangle with some giant centipedes on the first floor, a giant snake in a well outside, and then some giant spiders on the second floor. A few members end up taking a lot of poison damage, They do gain a small amount of treasure for their trouble, however, and they also come across another adventurer who has been hit in the back of the head and tied up. His name is Ted, and most of the group members don't really trust him. The group proceeds to investigate the attic, only to be attacked by a bunch of bloodbugs. They find a bit more treasure and then make their way to the basement. At the top of the stairs the Shining Scorpion party triggers another fear spell. It affects a few of the group, but they continue on their way. 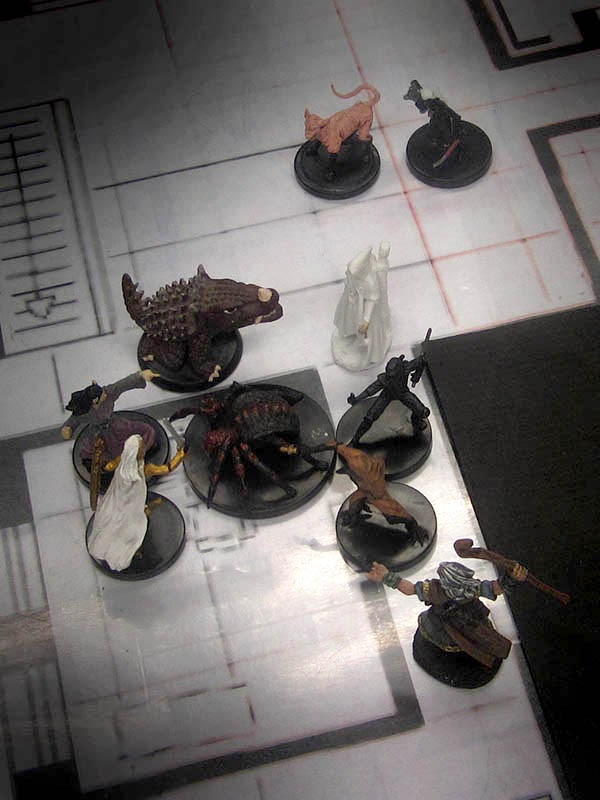 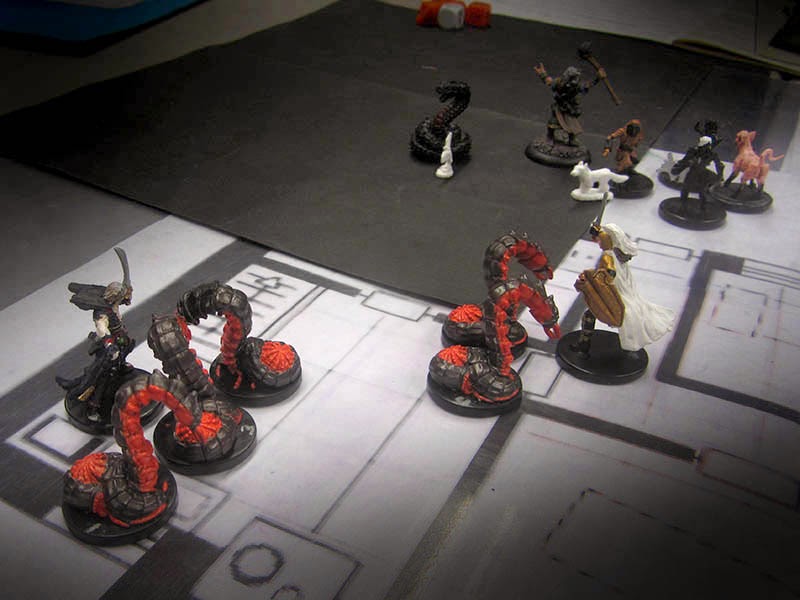 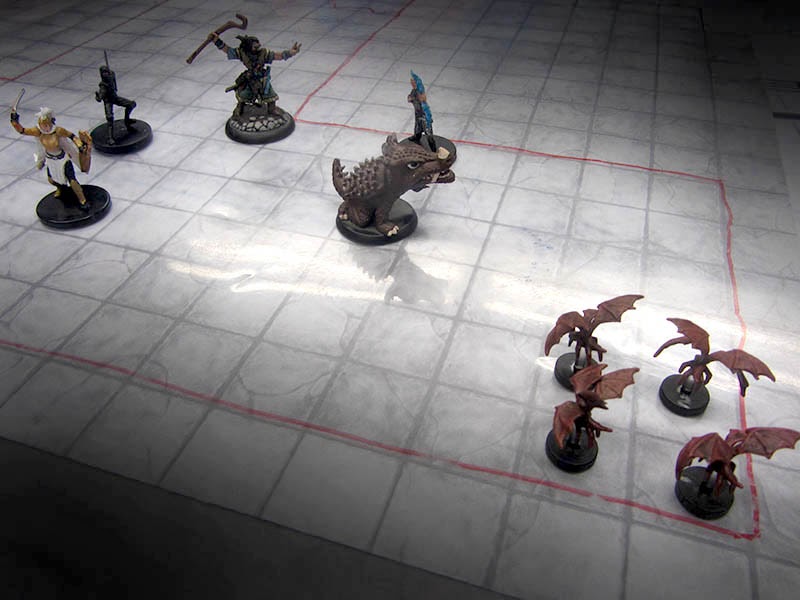 The house no longer seems haunted, and the party gets a feeling that the place has been set up specifically to scare people away. This is confirmed by a trap that they come across in the basement.
A corpse with magical armor is found in the center of the room. When they investigate the trap, the party is attacked by rot grubs. These things are nasty. A late addition to the party, a strong fighter, becomes the target of these creatures, and they go about burrowing into his skin. Ted, the un-trusted and recently freed prisoner of the smugglers, decides to run away from the grubs but Zav Zod Zoz the rogue grabs his shoulder and tries to stop him. Ted returns the gesture by drawing his blade and stabbing the Zav Zod Zoz. He survives the attack and the party eventually kills off the rot grubs and knock out Ted, but the fighter doesn't survive. Ted reluctantly apologizes, saying that he was stricken with fear and didn't mean to stab the rogue. 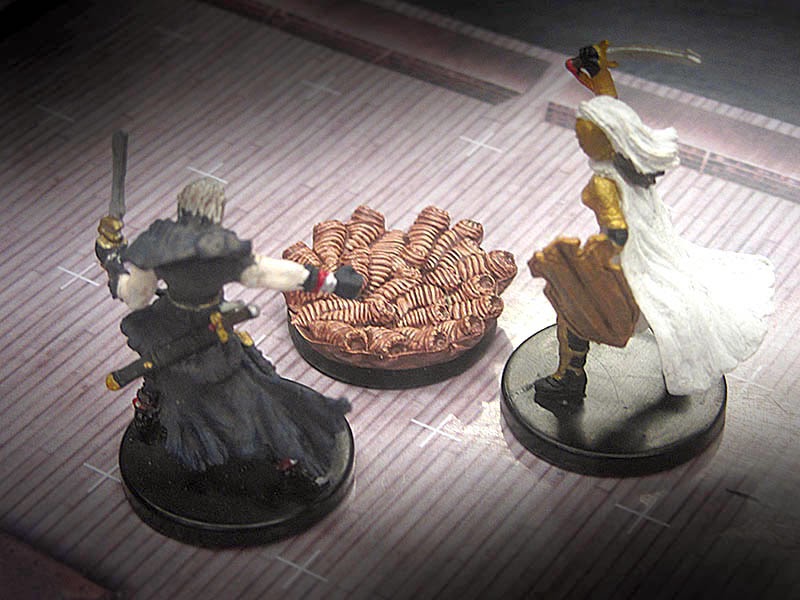 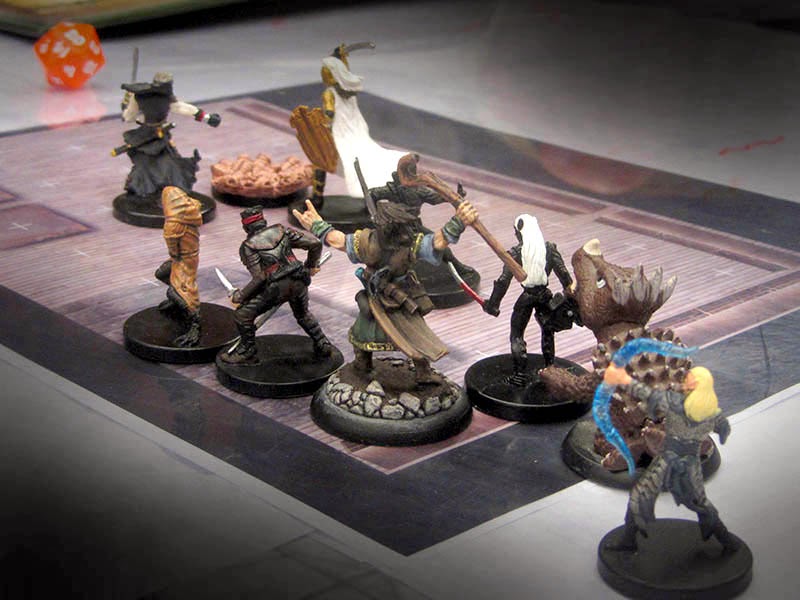 Investigating the room, the party finds a hidden door. beyond it, they find a barracks with lit torches and about 10 beds. At one end of the room, they open a door to another room. This one is filled with skeleton warriors, and they don't seem happy. The fight is pretty brutal, but the party survives and continues on. 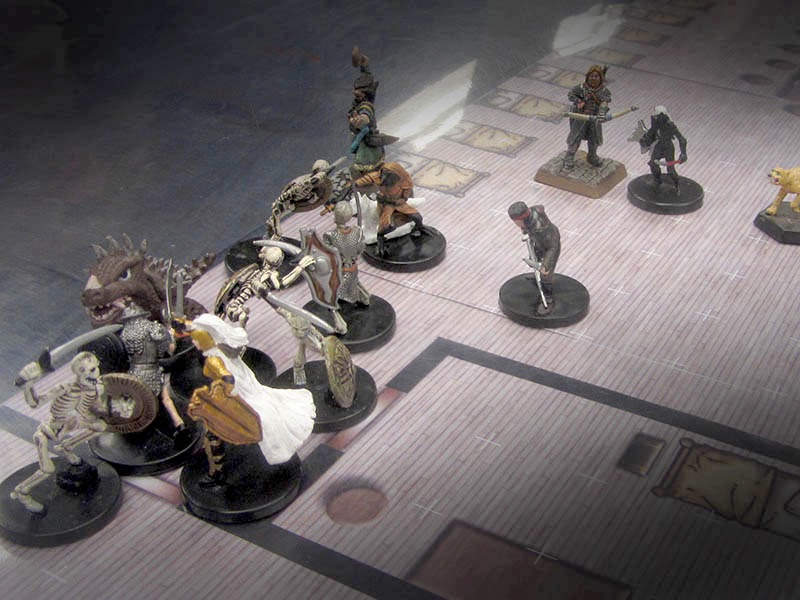 Beyond the barracks, the party finds a small system of caves that leads to the sea. They fight a group of thugs, a sorcerer and some gnolls, and they defeat them without much incident. During that fight, Ted shows his true colors and reveals he is one of the thugs. And although he has grown fond of Steelheals the paladin and Craig the ranger, he attacks them and the rest of the party before meeting his death. It turns out that the mansion and the caves below it have been being used in a smuggling operation. The party captures and interrogates the sorcerer, find out who the smugglers have been working with, and then they take him back to Saltmarsh. 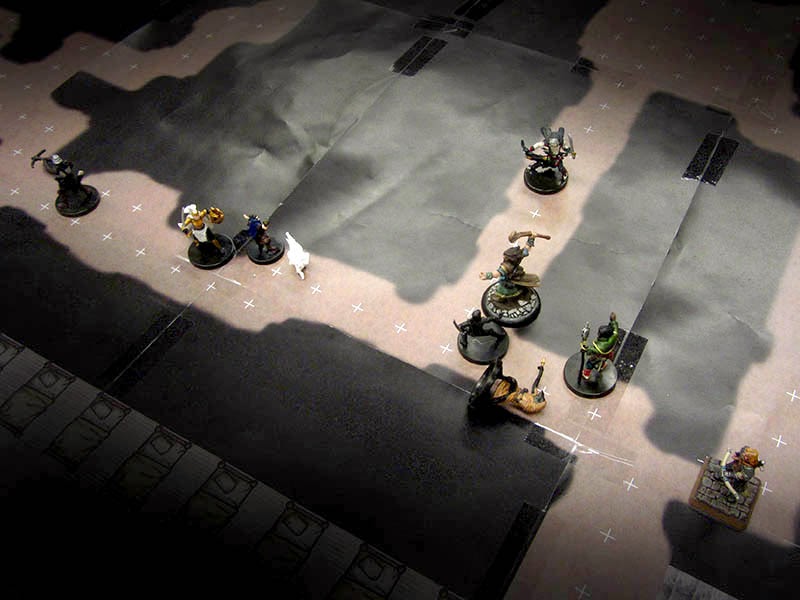 When they get to town, the party meets with the town council, and they discuss shutting down the smuggling operation. They decide that they will wait for the smuggling ship to come to the mansion, board the ship, and then deal with the crew. Meanwhile, Wilster the magus and Ehlum the summoner each have strange dreams that involve a pyramid and an evil being whose name they can't quite understand. It turns out that wizard who sits on the town council, Sorthen Ishtar, has been having the same dreams, except that his are much more intense. He gives the party the information that he knows, including the name of the evil being, Kathar, and the location of the pyramids. They agree to investigate at some point after dealing with the smugglers.

The Shining Scorpion party defeats the smugglers handily, even though their attempt to board the ship stealthily fails. The enemy crew is large, but the party does a good job of dividing them by attacking from different parts of the ship. As they search the ship, the crew finds a great amount of treasure. Among the gold and jewels, they come across a very valuable specimen, a small purple pseudodragon. The creature eventually bonds with Craig the ranger from the plane of shadow and becomes one of the group. 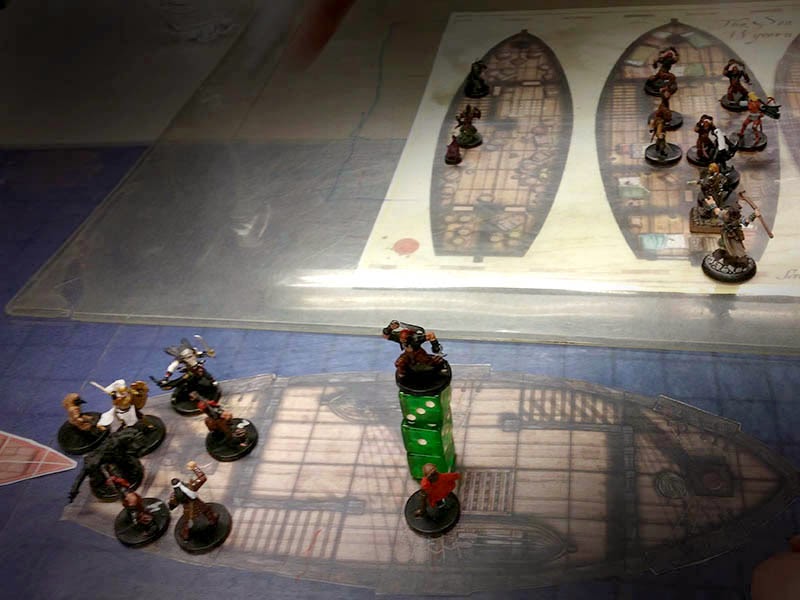 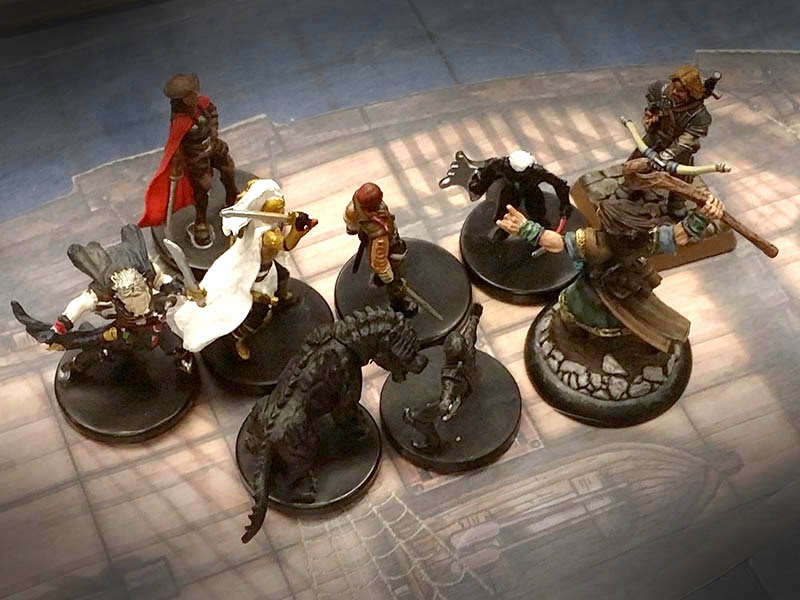 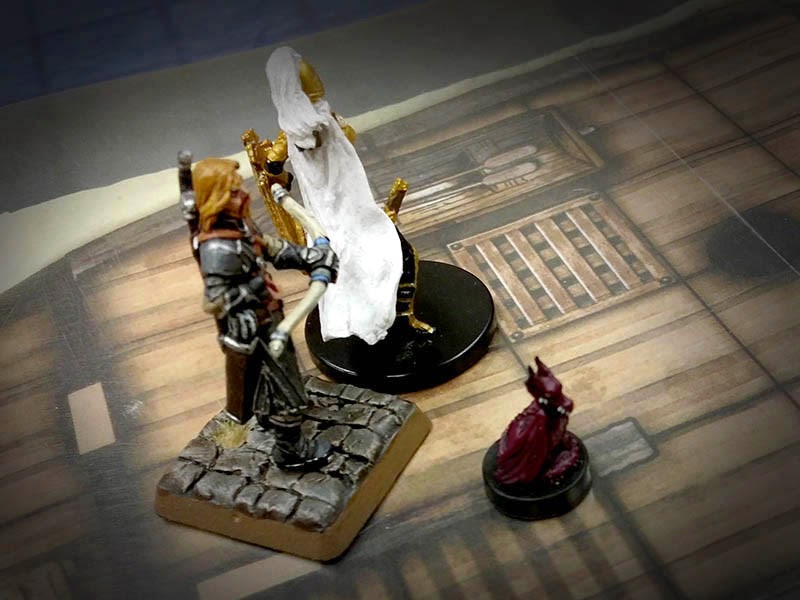 Back at the town, the Shining Scorpion party looks to their future. Now in possession of a ship and a fair amount of loot, the party takes score of their situation. With the ship, they can now sail the coast at will, investigating rumors and leads into further adventure and great wealth. But first, they need a crew to man the ship and more gold with which to pay them.

Choosing from a few options locally, the party decides to turn their attention to the turn rocks just offshore of Saltmarsh. Prisoners ordered to die by the city eventually find themselves left displayed in chains on the rocks, allowing the sea to execute their sentences. The three rock formations are also rumored to have secret tunnels underneath them, and plenty of treasure with which the crew can line their pockets. At low tide, the party searches the area and find the secret door to the tunnels. Below in the darkness they are greeted by a swarm of undead. The Shining Scorpion clears the immediate area of zombies after a couple battles, and are left to choose between heading down a long tunnel or swimming through a cave on the other side of a closed door. Ehlum the summoner sends his two-headed eidolon forward to investigate the water cave. Craig sends his pseudodragon ahead with the beast. After navigating a few tunnels, the beast fails to notice ripples in the water heading towards him... 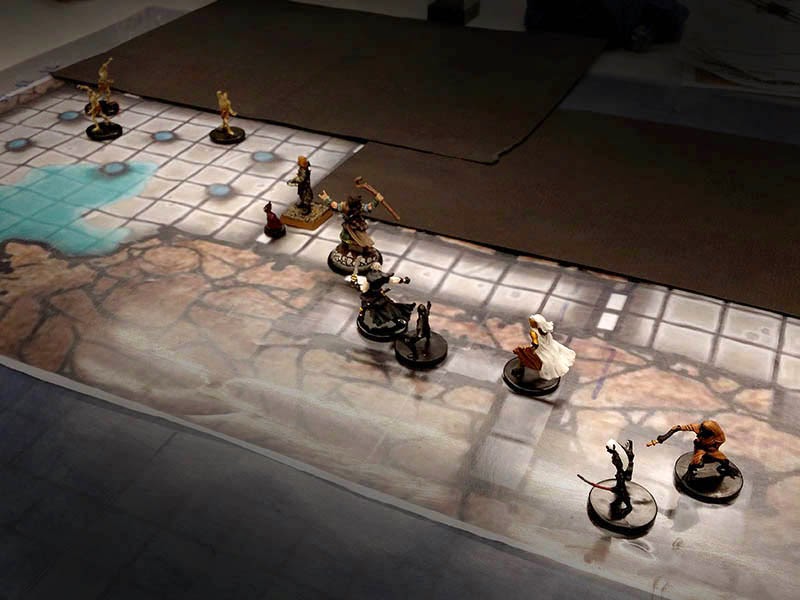 And that's where we left it! We're playing again tomorrow night, and we'll be back here with a more detailed account of the that encounter.
Posted by Unknown at 11:09 AM