After dealing with the huecuva and the ghouls, the Shining Scorpion adventuring party heads down the last hall of the dark, abandoned smuggler caves to a flooded room. The space is rectangular, with 4 columns in the center of the room that rise from the water to the ceiling. The water seems to have seeped in from a large crack in the wall, but there is no indication that the water in this area rises any further during high tide. After finding danger in every other area of the caverns, the party is hesitant to move into the room. The summoner, Ehlum Davusaam, summons a small water elemental to scout ahead. Confirming it's orders in the bubbly sounding language of the elemental water plane, the creature turns and then dives into the small pool. The hall is silent except for the light sloshing sounds coming from the pool, but then a roar erupts as water suddenly comes to life! 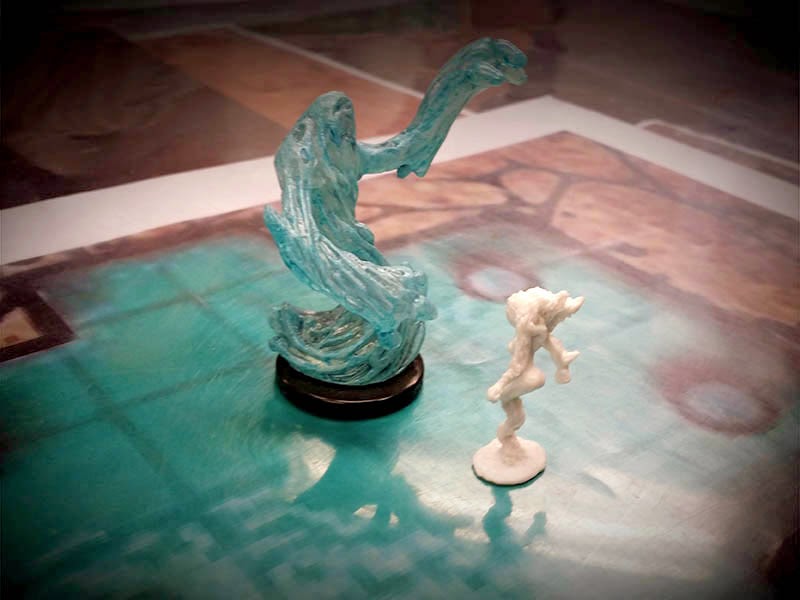 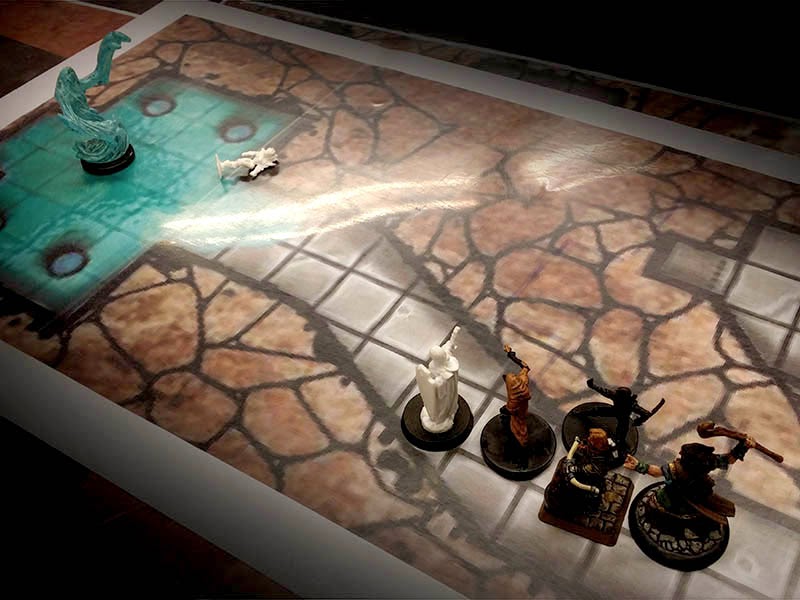 The party sees the shape of the Ehlum's summoned creature ahead, seemingly wrestling with twisting vortex of water that is rising from the pool. A separate water elemental, larger than the small creature Ehlum sent forth, surprised the smaller creature and has attacked! Acting quickly, the party uses ranged attacks on the liquid beast as the smaller elemental uses it's own slam attacks. Shortly after the battle begins the fetchling ranger, Craig Shadowbane, fires the final arrow that disrupts the lurking creature's cohesion, and the water settles again into stillness. If one could understand Aquan, the language of the elemental plane of water, they would hear the small elemental yelling insults at the larger, defeated creature. The party searches the pool of water but come up with nothing. They then rest, wait for the tide to go back down, go back for the coins in the sea cave and head back to Saltmarsh.

Over the next few days the party hires the first of their crew, Mavron the retired pirate that sits on the city council, and a few of his cronies. They take the time to remove the cursed stone from Ehlum's possession, and cure Steelheal's blight. The party discusses their options from here. Before sailing on, they decide to investigate the old, abandoned Vanderbeek mansion in hopes of finding more treasure and leaving the area a bit safer for the people of Saltmarsh.

First thing in the morning the crew leaves and trudges through the swamplands to the ruined Vanderbeek mansion, but they have a hard time keeping track of and staying on the path. They see remnants of abandoned buildings that used to be part of Saltmarsh. The crew notices that there is an odd absence of large animals in the swamp during their 2nd hour of travel, and a complete absence of all animals during the 3rd hour. Ehlum's eidolon senses that there is something ahead off to the side of the trail, some type of large creature in the water. Craig the ranger decides to use stealth to flank the mysterious, submerged lump. He climbs a tree, but can't see much more. He sends the pseudodragon Felaket to inspect it. The tiny dragon says that it's Swamp Chomps, and it's dead, having been ripped in half. Craig decides to investigate closer, and sees that it is the corpse of a saltwater crocodile. It's been dead for a while.

As the party concludes the investigation, the eidolon sees the destination ahead in the distance. The Vanderbeek "mansion" is just a collection of broken walls with no roof whatsoever. The crew spreads out with the stealthy ones taking the lead. As they enter the grounds of the estate, Craig notices tracks from a huge creature. They don't seem to lead anywhere in particular, but rather they move back and forth throughout the area. Felaket and the eidolon investigate the ruined mansion. The tiny dragon finds a stairwell that leads underground, but as the party moves towards it they are attacked by a marsh giant! The creature is grotesque, with slimy grey skin and an oval shaped maw full of pointed teeth. It's black eyeballs add to its unnatural and horrific appearance. 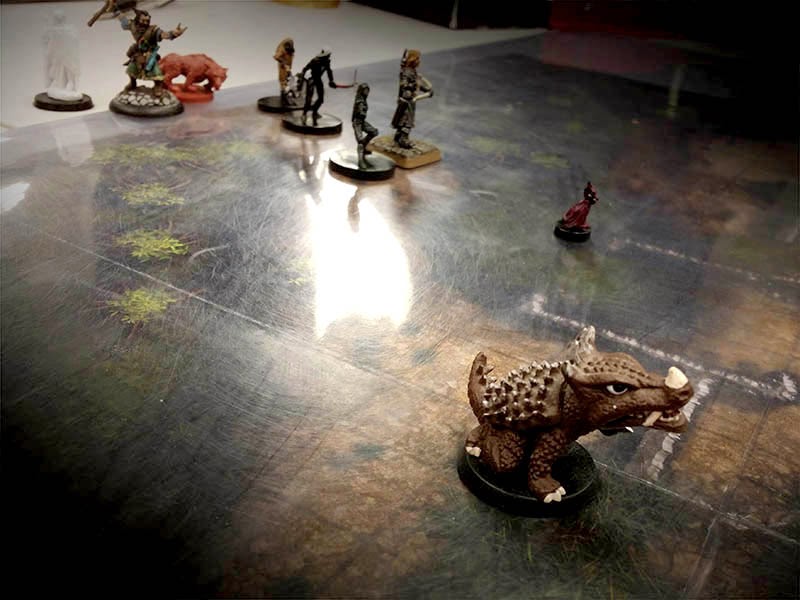 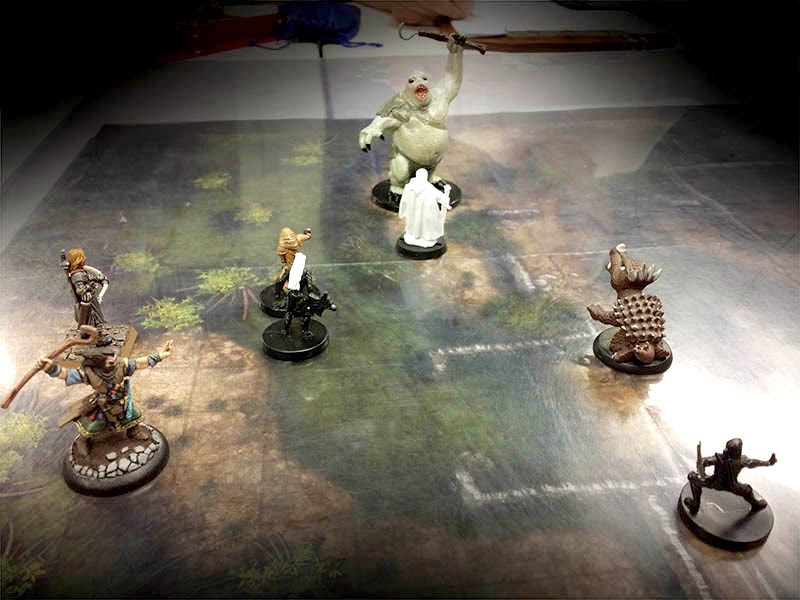 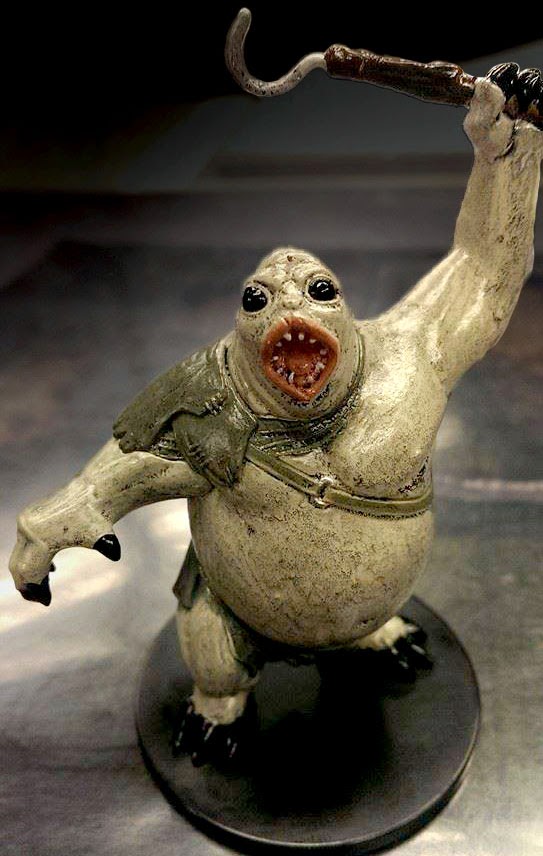 Ehlum starts it off by casting haste on Steelheals the paladin, Craig the ranger, Tribad the ninja, and himself. A couple of missed ranged attacks from the party are followed by the marsh giant attempting to curse the paladin, but her willpower is enough to overcome it. The beast moves forward, and Ehlum casts mage armor on it. The beast then runs up and bites the giant with a reach attack. The ranger hits it with an arrow, as does the ninja. The creature roars in anger and swings its gaff twice at the paladin and hits with the second attack, dealing a lot of damage and bloodying her. The rogue runs up and stabs the giant with his dagger. Ehlum uses his haste and runs around to flank, activates his elemental strike and strikes the monster. The party misses a number of attacks, and the ugly beast swings even more wildly, doing major damage once again, this time to the summoner Ehlum.

And that's where we had to end it. We play again tomorrow night. Will the marsh giant prove to be too much for our strange collection of adventurers to handle? Will they all survive?!?!
Posted by Unknown at 10:47 AM