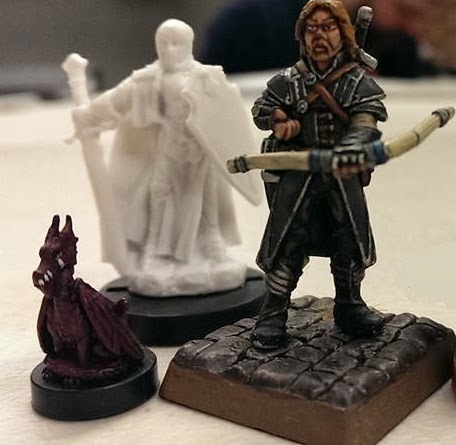 Craig Shadowbane sat on the deck with his back against the forecastle. The shadows reached out with an embrace and he accepted, his gray skin blurring at the edges.

He looked up and watched the pseudodragon ride the warm air currents, her violet scales almost lost with the setting of the sun.

Somehow in the heat of battle they had bonded and now there was a presence in the back of his mind.

So much had happened since he met Steelheals and he didn’t know what to think or who to trust. She was the only one he did.

His new companions were busy moving around the ship. Wilster, with his new hat, was playing at captain and Ehlum was speaking with the air elementals. The ninja was nowhere to be seen. These Scorpions, as they called themselves, were as varied a crew as he had ever seen. But so were they he knew, him and Steelheals, an Aasimar and a Kayal—one of Light and one of Shadow.

So far they worked well together, even though they were watching each other’s actions. Trust wasn’t built overnight.

He was getting hungry but he didn’t want to leave the safety of his shadows. His supper mustn’t have been enough.

Across the deck the door to the sterncastle opened and Steelheals walked out. Her skin seemed to glow white in the dying light of dusk. She scanned the horizon until her eyes found Craig and she made her way over.

Above, the pseudodragon dove towards the surf.

“You should join them Craig. We need to find out how much good is in them,” she said when she made her way over.

“Only the Drow, we will need to turn him in soon.”

“Alright. I’ll watch the ninja and Aicho. When it’s time I’ll draw them out.”

“Then watch, learn.” She stood at parade rest with her hands clasped behind her back.

His stomach growled and he looked away from his dragon to Steelheals. “Your list must be getting heavy. That is quite a burden you carry.”

He raised his hand to silence her and reached for his bow while pulling more shadows around him. He felt…danger?

He looked around but the feeling went away. Slowly he let the shadows return to where they came from.

“I thought I felt danger.”

“Let me see if I sense anything.”

Overhead he saw the pseudodragon land on the mainmast spar. There was some sort of fish in its mouth and as Craig watched she ripped into it. Soon his hunger vanished.

“Craig, I sense nothing.”

She walked away and he watched his new friend. She soared on the updrafts and with her talons swiped three more fish from the blue waters below.
Posted by Corey Podwinski at 8:39 AM