Last time, the Shining Scorpion adventuring party continued exploring the hidden caves under the turn rocks just offshore of the town of Saltmarsh. After fighting some ghouls, the group decided to open a stuck door that opened to a cavern that looked as if it would fill with water come high tide. Ehlum the summoner had sent his eidolon to swim ahead of the group and scout. The creature ventured forth, followed by Craig's psuedodragon companion, and swam nearly 100' through a tunnel of waist deep seawater before finding a large cave of deeper water.

Ehlum's eidolon, an intelligent, extra-planar creature that shares a close bond with the summoner and is currently in the form of a two-headed dog-like beast, swims into the open cave. Its darkvision allows it to see a door on the other side of the pool of water. This impressive ability fails the creature, however, as it doesn't see the ripples in the water heading for it. A large shark splashes out of the water and attempts to take a large bite out of the hide of the eidolon. The beast just dodges the creature's attack.

Back at the entrance to the area, Ehlum hears the beast tell him of the sea creature thanks to an active message cantrip. The summoner relays the information to the rest of the party, activates his bond senses ability to see through the eidolon's eyes, and starts towards the cave. Meanwhile the beast successfully bites the shark with both of its heads, doing a good amount of damage. The shark is powerful though, and it lunges through the water, brutally clamping its jaws down upon the eidolon's shoulder. The two creatures continue to trade blows, gnawing on each other as the rest of the party tries to join the fight. 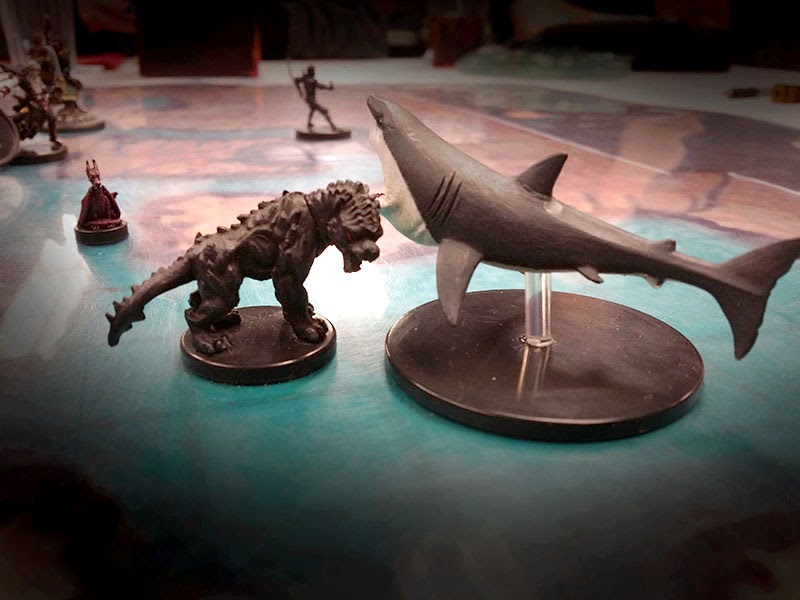 As they move through the sea tunnel towards the fight in the cave, the party has trouble staying on their feet in the waist-high waters. Tribad the ninja is the first to make it to the cave, but isn't quick enough to save the beast from being torn apart and banished back to its home plane of existence. Unable to gain purchase on the cave walls to better use his bow, Tribad instead drops below the surface of the water delivers an arrow directly into the shark's gaping maw, finishing the sea-creature off instantly. 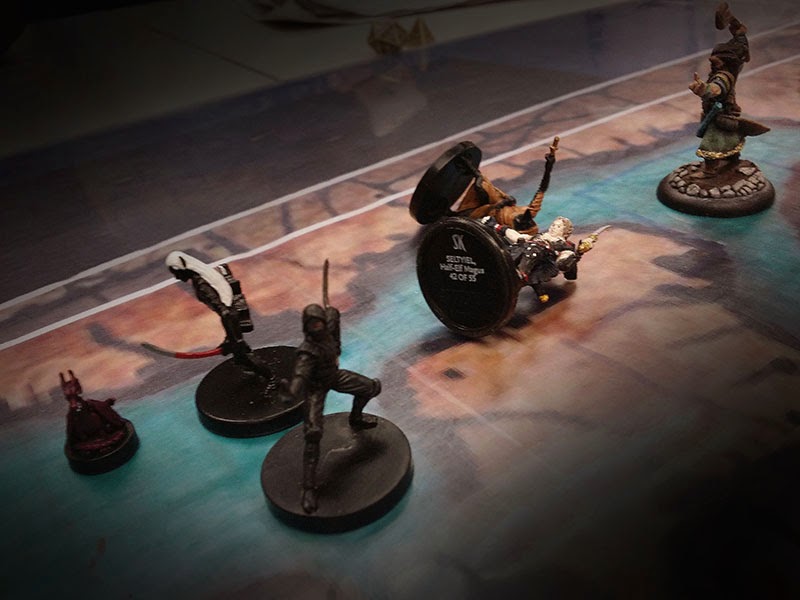 As the rest of the party catches up, they find that the door on the other side of the pool is barred from the other side. Wilster the magus begins hacking at the door, and Ehlum summons a small elemental to follow another tunnel under the water, leading out of the cave. The party finds a small 10' x 10' room on the other side of the door. On the floor is a skeletal corpse wearing armor and clutching a scroll in one hand. Upon inspecting the scroll, Wilster finds that it is a map of a jungle further up the coast, showing the way to the lost city of Tamoachan. Ehlum detects magic on the other side of the back wall, and upon searching Tribad finds a hidden door that opens to a room that is slightly bigger than the previous room. Inside are 3 chests filled with a lot of coin, gems, and valuable potions. Not able to swim out with the chests easily, the party collects the gems and potions, leaving the coin behind for now. When they are ready to head back out of the area, the summoned elemental returns to Ehlum and informs him that the underwater tunnel leads to the bay, indicating that this is how the shark entered the cave.
The party leaves the sea cave and heads for the unexplored tunnel. Craig, still suffering from a bunch of DEX damage, moves in first only to find another group of four ghouls occupying a side room. One of them is actually a former human cleric, Veldemar Krund, who is now a powerful, un-dead huecuva. Craig begins firing arrows and Wilster slashes with his scimitar, and together they quickly dispatch the first monster. 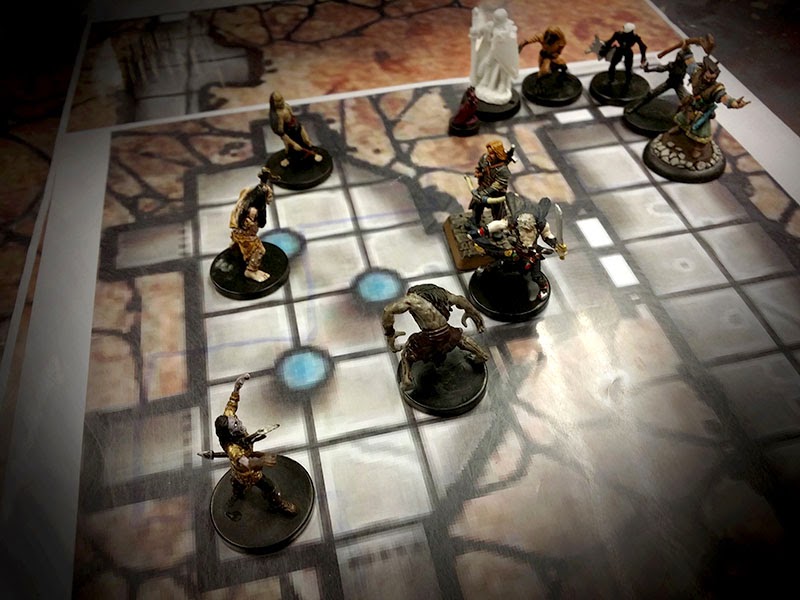 Ehlum invokes the power of his suli-jann heritage and lightning begins to dance in his eyes, along the length of his arms, and to his morningstar. He recklessly charges one of the enemies, but his gambit pays off as he crushes the ghoul with three hits from his electrified weapon while the creature's own attacks are met with a shocking feedback. Steelheals the paladin, Zav Zod Zoz the rogue and Aichio the tengu witch stream in to attack the third ghoul, while Tribad and Wilster charge the huecuva. 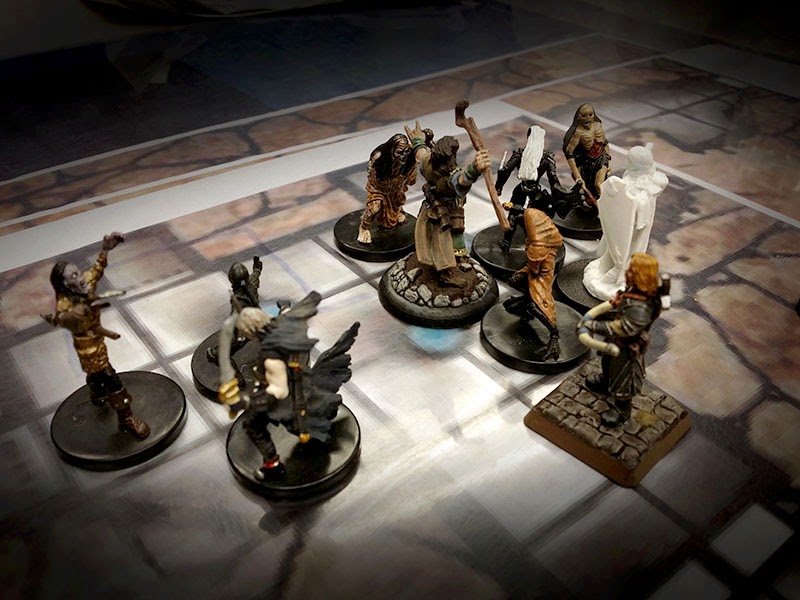 The crew dispatches the final ghoul henchman, and everyone then joins Wilster and Tribad in fighting the huecuva. Wilster finishes off the huecuva using scorching ray. The Shining Scorpion party heals up and continues down the tunnel, which seems to end with another pool of water. 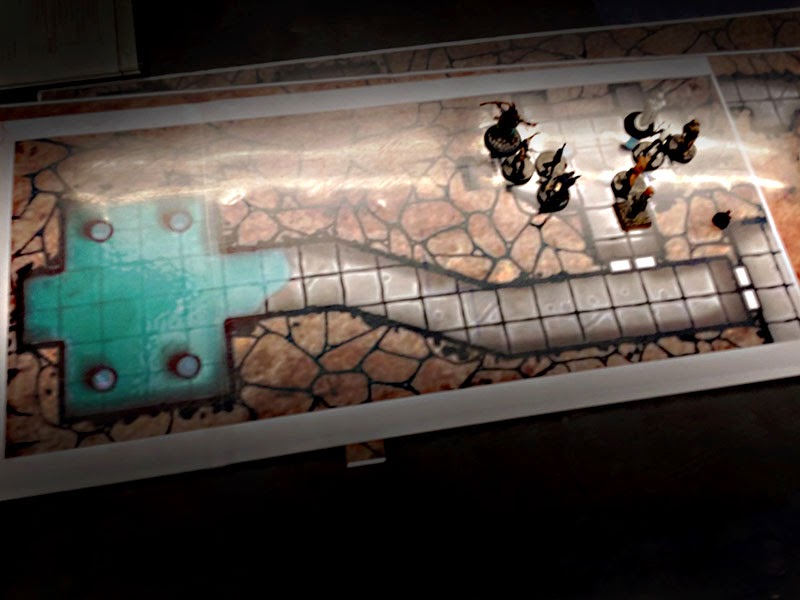 And that's it! Also, it's time to level up to 4. We'll be back next week, probably finishing off these secret sea caves and then heading back to Saltmarsh to divide the treasure.